Author Admin
This August marks the 68th anniversary of the atomic bombings of Hiroshima and Nagasaki at the end of World War II. Working together with the Hiroshima Peace Memorial Museum and the Nagasaki Atomic Bomb Museum, we’ve launched seven new online exhibits on the Google Cultural Institute that help tell the story of the two cities and their tragic fate.

Explore four collections from the Hiroshima Peace Memorial Museum that illustrate the bombing from different perspectives: a pocketwatch stopped at the exact time of the detonation, diaries of young women cut off abruptly on August 6, and panoramic photos of the hauntingly barren city center days after. While most of the materials document the harrowing devastation of the bomb and its aftermath, the gallery “Recalling the Lost Neighborhoods” helps archive the old Hiroshima that vanished off the map.

Pocketwatch showing 8:15, the time of the atomic bomb drop (from the Hiroshima Peace Memorial Museum)
The Nagasaki Atomic Bomb Museum meanwhile curated photos, videos, and drawings in three exhibitions. One collection focuses on the famed Urakami Cathedral—the largest cathedral in East Asia where 15,000 Japanese Catholics once worshipped. The church completely collapsed after the bombing, but thanks to a post-war reconstruction effort, the Urakami Cathedral now stands triumphant as a symbol of the city’s rebirth. 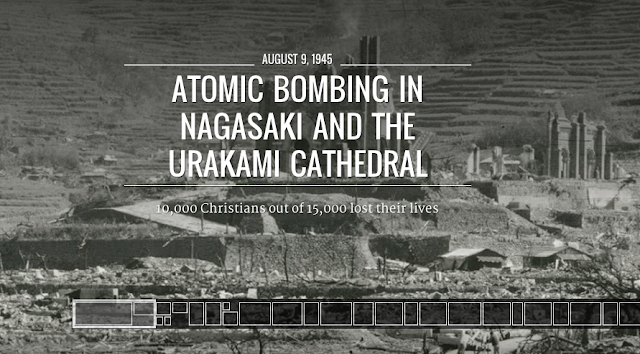 Urakami Cathedral exhibition (from the Nagasaki Atomic Bomb Museum)
Speaking at an unveiling ceremony for the exhibits in Hiroshima today, Hiroshima Mayor Kazumi Matsui said, “Through the Google Cultural Institute exhibitions, we hope that people around the world would learn about the terrible experiences of the Hibakusha, or A-bomb survivors, and wish for peace.”

The Cultural Institute was created to help preserve the world's history and heritage. Given the average age of the Hibakusha is now past 78, we're honored that our digital exhibit can help keep the memories from both cities alive for the future.