Sharing stories of Bletchley Park: home of the code-breakers

Author Admin
For decades, the World War II codebreaking centre at Bletchley Park was one of the U.K.’s most closely guarded secrets. Today, it’s a poignant place to visit and reflect on the achievements of those who worked there. Their outstanding feats of intellect, coupled with breakthrough engineering and dogged determination, were crucial to the Allied victory—and in parallel, helped kickstart the computing age.

We’ve long been keen to help preserve and promote the importance of Bletchley Park. Today we’re announcing two new initiatives that we hope will bring its story to a wider online audience.

First, we’re welcoming the Bletchley Park Trust as the latest partner to join Google’s Cultural Institute. Their digital exhibit features material from Bletchley’s archives, providing a vivid snapshot of the work that went on cracking secret messages and the role this played in shortening the war. Included are images of the Bombe machines that helped crack the Enigma code; and of Colossus, the world’s first programmable electronic computer, used to crack the German High Command code—including this message showing the Germans had been successfully duped about the location for the D-Day invasion. 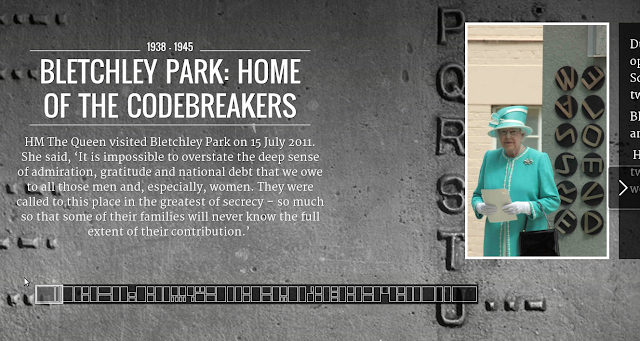 Second, as a followup to our film about Colossus, we’re pleased to share a personal story of the Bombe, as told by one of its original operators, Jean Valentine. Women like Jean made up the majority of Bletchley Park’s personnel—ranging from cryptographers, to machine operators, to clerks. In her role operating the Bombe, Jean directly helped to decipher messages encoded by Enigma. In this film Jean gives us a firsthand account of life at Bletchley Park during the war, and demonstrates how the Bombe worked using a replica machine now on show at the museum.

We hope you enjoy learning more about Bletchley Park and its fundamental wartime role and legacy. For more glimpses of history, explore the Cultural Institute’s other exhibitions on www.google.com/culturalinstitute.