YouTube shows rolls out across the sky, aboard Virgin America flights

Author Admin
We’re teaming up with Virgin America to bring you great shows from five YouTube partners right on your personal seatback screen. By mid-December, Warner Brothers’ H+ The Digital Series, WIGS’ Blue, Geek & Sundry’s Written By a Kid, Crash Course and Barely Political’s The Key of Awesome will be available for free on all Virgin America planes in the US and Mexico.

Venture into an apocalyptic future where the human race is hardwired to the Internet and a virus has entered the system with H+ The Digital Series. Or watch Julia Stiles in Blue, the story of a single mom trying to evade her past and protect her son from a secret she’ll do anything to keep.

In the mood for some comedy? What's funnier than a kid's wild imagination? Watch these tales come to life in hilarious live-action and animated shorts on Written by a Kid. Or indulge your ironically-pop-loving side as The Key of Awesome makes a mockery of hipsters and hobbits alike with music videos, fake movie trailers and other ridiculous sketches.

When you’re ready to enlighten yourself, join John Green with his quirky, fast-paced and entertaining teaching style for a Crash Course on The Fall of Rome, The Dark Ages and The Mongol Empire.

Bringing YouTube aboard Virgin America is part of a larger effort to bring you more of the videos you love, at heights you’ve never seen them before. Sample these great series on your flight, and then visit YouTube to enjoy the full seasons. New series and shows will become available every two months.

So pack up your 3 oz containers, fasten your seatbelt, and join YouTube and Virgin America 35,000 feet in the air. Happy flying! 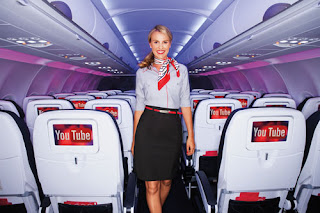