Author Admin
What do you get when you combine world-famous comedians with the world’s biggest video-sharing site? OK, you guessed it: YouTube Comedy Week. But Comedy Week is about a lot more than simply bringing together comedy’s best and brightest for an online celebration of funny.

This week we also connected with YouTube’s biggest comedy fans. We decided to shine our spotlight on seven "Super Fans": Zach, Christine, Mavis, Lo, Jesse, Mike and Jack (the 14-year-old "Britain’s Got Talent" comedian whose first YouTube video got more than 3 million views). 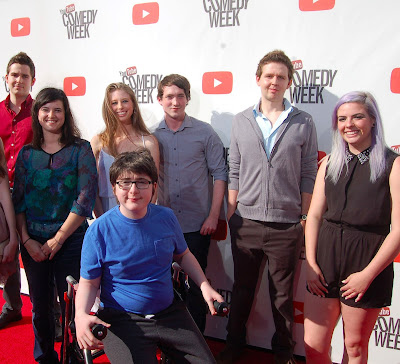 The Super Seven dropped everything and flew in from all over the country (and world) to attend: the U.K., New Jersey, South and North Carolina, and Washington state. They came together for their love of YouTube comedy, and they were not disappointed. The day was full of smiles, vines, tweets and videos as they met their favorite comedians, including (but not limited to!) Smosh, Hannibal Buress, Reggie Watts, JASH, Tim and Eric, Skrillex and "Workaholics." At the end of the night, they tore up the dance floor with countless Comedy Week performers.

Wish you could’ve been there too? Don’t get us wrong, we love ALL our comedy fans, and we’re still looking for more YouTubers to show us just how much they love laughing … from the comfort of their own home. Want to be involved with Comedy Week? Here’s how:
There’s a world of amazing comedy out there, and it’s all coming together for one side-splitting week. Be sure to keep laughing--and keep us laughing.