The journey to Venice begins: Top 10 films selected for Your Film Festival

Author Admin
Today, we are one step closer to finding the world’s next great storyteller. Over 15,000 filmmakers entered Your Film Festival but only ten finalists remain, each with the hope of winning $500,000 to produce new content with actor Michael Fassbender, director Ridley Scott and his world class team.

During the past month, 3 million people got involved with Your Film Festival by watching, sharing, and voting for their favorite films. After tallying the votes, we’re excited to announce our ten finalists:

The finalists will soon travel to Italy where they will have their short films screened at the historic Venice Film Festival. They will also pitch a new project idea to Ridley Scott’s production team who, along with the jury including Michael Fassbender, will ultimately name the grand prize winner at a special ceremony on September 2, 2012, in Venice. As part of their journey to Venice, Emirates has invited the filmmakers to stopover in Dubai for a series of events celebrating their achievement.

Join these filmmakers as they travel to Venice and stay tuned to the Your Film Festival channel where we’ll take you behind the scenes, tell you more about the finalists, provide special edition movie posters, and of course, unveil the winner.

Author Admin
About a year ago, we brought you thousands of full-length feature films from major Hollywood and independent studios to rent on youtube.com/movies. Following our launch yesterday, you can buy movies and TV content from shows like Revenge, Parks & Recreation and Breaking Bad, and top movie studios like ABC Studios, NBCUniversal and Sony Pictures.

Purchased movies and shows can be played back as many times as you like on YouTube, and on your Android device via Google Play. We’ll soon be bringing the experience to Google TV devices too. 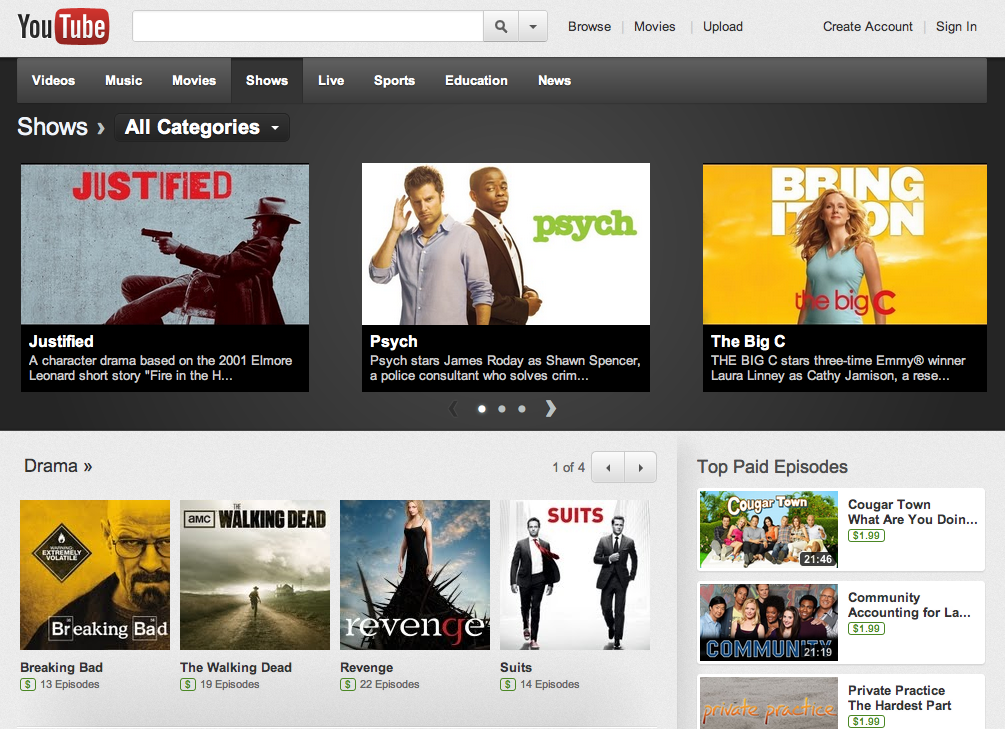 Visit youtube.com/movies and youtube.com/shows today to discover and buy your favorite movies and TV shows, and check back soon for even more titles and shows in the coming weeks.

Author Admin
In the last few decades, South Korea has emerged as a powerhouse of cinema, with both Korean-made films winning global accolades and Hollywood remaking Korean mega-hits like My Sassy Girl, and, if industry gossip is true, Oldboy. Many of the all-time classic Korean films, however, have been hard for global audiences to get their hands on.

Working together with the Korean Film Archive, we now have 70 classic Korean films available globally for free on YouTube—complete with English and other translated subtitles. The films are all available at youtube.com/koreanfilm, organized in playlists by decade as well as by director.

Movies include A Hometown in Heart, made in the early years of Korean Independence; debut film of noted auteur Sang-soo Hong The day a pig fell into a well; A Coachman, the first Korean film to win awards internationally; and more. Many other titles like Aimless Bullet and The Barefooted Young are available in HD.

We hope this archive will keep Korean cinephiles busy for a while with films that have been too hard to find outside of Korea for too long.

Michael Fassbender and Your Film Festival

Today, we'd like to introduce the newest member of the Your Film Festival team, award-winning actor Michael Fassbender.

Fassbender joins Ridley Scott as a Your Film Festival juror, as well as co-executive producer on the winner's grand prize project. This means that he and Ridley will work together to produce the winner’s next film project! With credits including Shame, X-Men: First Class, 300 and Inglorious Basterds, Michael brings world-class experience ranging from some of the biggest blockbusters to the most critically acclaimed indies.

If you haven't submitted yet, consider this your 1-month warning. Submissions close on March 31 at midnight ET. For more information, check out the Your Film Festival channel.

Bringing the creativity of the Sundance Film Festival to YouTube

Author Admin
The annual independent film extravaganza known as the Sundance Film Festival is underway in Park City, Utah. For film lovers who couldn’t make it this year to meet to-be-discovered filmmakers and rub shoulders with celebrities, we're bringing Sundance to you here on YouTube.

Last year, we showcased past and present short films in the YouTube Screening Room. This year, we’ve teamed up with Sundance Film Institute to premiere a collection of films that are available for the first time for digital stream.

To mark the last weekend of the festival, we’ll premiere Tim and Eric’s Billion Dollar Movie tomorrow at the same time the shock humor duo showcase their world premiere at the 2012 festival. This star-studded comedy features Zach Galifianakis, Will Ferrell, John C. Reilly and is already picking up buzz in Park City.

For the best of Sundance and thousands of other titles, get more into movies at YouTube.com/Movies.

Welcoming your favorite Disney movies to rent on YouTube

Author Admin
Today, the first of hundreds of The Walt Disney Studios movies from Disney, Disney·Pixar and DreamWorks Studios are coming to YouTube. These titles join thousands of full-length feature films from major Hollywood studios that already are available to rent at YouTube.com/movies.

Fans of animated movies? We’ve got the beloved animated classic, Alice in Wonderland and the newly envisioned Winnie the Pooh. Love Disney·Pixar? We have hits like Cars and Cars 2 all in one place. Up for a little bit of adventure? We’ll take you from the darkest depths of the oceans with all four of the Pirates of the Caribbean movies, including the most recent blockbuster in the franchise Pirates of the Caribbean: On Stranger Tides.

So gather the family and friends to watch your favorite Disney movies at YouTube.com/movies. Check back in because even more of the great Disney classics and new releases will be added in weeks to come, including our YouTube Movie Extras with behind-the-scenes clips, interviews, and more.

Author Admin
On November 7, 1991, Magic Johnson told the world he’d been diagnosed with HIV and promised that “I plan on … living for a long time.” 20 years later, Magic proves that you can be an entrepreneur, talk show host, successful businessman, educator and more, living with HIV.

For more information on the Magic Johnson Foundation, its programs on college access, digital literacy, and its local centers in the US, please visit here. We’d also like to recognize YouTubers giving inspiration to the HIV community like Christopher, Rebekkah, Andre, Ben and others. To find out how you can learn more or get tested for HIV/AIDS please visit http://aids.gov/locator/.

Author Admin
On July 24, 2010, thousands of people around the world recorded videos of their lives to take part in Life in a Day, a cinematic experiment to document a single day on earth. From more than 4,500 hours of footage recorded and uploaded to YouTube, Oscar-winning director Kevin Macdonald and executive producer Ridley Scott created a 90-minute feature film that offers an entertaining, surprising and moving view of life on earth.

After a theatrical release in countries around the world including appearances at the Sundance, Berlin, SXSW and Sydney film festivals, Life in a Day is finally coming home to YouTube—in its entirety, for free.

Starting today you can watch Life in a Day on YouTube, available with subtitles in 25 languages. So if you haven’t seen it yet or want to relive the experience that The Times of London considers “a thrilling piece of cinema” and the Washington Post called “a profound achievement,” now’s your chance.

If you’d like to own Life in a Day, a DVD is also available. You can find more details about this, and the whole project, on the film’s official YouTube channel.

Trespass with Nicole Kidman and Nicolas Cage is in theaters today, and at home on YouTube

Author Admin
Nicole Kidman, Nicolas Cage and Joel Schumacher. Two Oscars and countless nominations among them, this team is bringing you a new thriller called Trespass that is out in theaters today, and even more—it’s available on YouTube Movies in the US as well.

Director Joel Schumacher sat down to talk with us about what lead to the decision to release Trespass on YouTube as well as in theaters, experiences in the film industry and his cast-driven films, which you can see with our YouTube Movie Extras. As Joel says, “I know certain people in my industry are furious about … their films being shown in anyway than they were supposed to be meant to be seen [in theaters]. However, there’s no stopping technology.”

Trespass joins other YouTube Movies like Kevin Smith’s Red State that had a pre-theatrical release on YouTube, one of the many ways we want to help you get more into movies.

Author Admin
Back in May we brought new release movies and more for rent to YouTube in the US. Last month, we took it to Canada. Now, over a thousand full-length feature films from major Hollywood and British studios are available for rent in the UK at youtube.com/movies.

We’ve got some cracking films to keep everyone entertained through the upcoming winter months and beyond. From blockbusters like The Dark Knight and Reservoir Dogs, to new releases such as Hanna, Fast Five, and Red Riding Hood, and even British classics like Monty Python’s The Meaning of Life and Lock, Stock and Two Smoking Barrels, you can find many of your favourite films in high quality available to rent now at youtube.com/movies.

There’s always more to explore on YouTube. Many movie pages also feature YouTube Movie Extras with free behind-the-scenes videos, cast interviews, parodies, clips and remixes from YouTube’s unique community of content creators. Over time we'll also be adding additional videos and features to YouTube Movie Extras so that you can get even more into movies on YouTube.

Britain has a long history of cinema, starting from the first moving pictures being developed on celluloid film in the UK. Now British film buffs can be part of the digital revolution too, at youtube.com/movies.