Author Admin
In the last few decades, South Korea has emerged as a powerhouse of cinema, with both Korean-made films winning global accolades and Hollywood remaking Korean mega-hits like My Sassy Girl, and, if industry gossip is true, Oldboy. Many of the all-time classic Korean films, however, have been hard for global audiences to get their hands on.

Working together with the Korean Film Archive, we now have 70 classic Korean films available globally for free on YouTube—complete with English and other translated subtitles. The films are all available at youtube.com/koreanfilm, organized in playlists by decade as well as by director.

Movies include A Hometown in Heart, made in the early years of Korean Independence; debut film of noted auteur Sang-soo Hong The day a pig fell into a well; A Coachman, the first Korean film to win awards internationally; and more. Many other titles like Aimless Bullet and The Barefooted Young are available in HD.

We hope this archive will keep Korean cinephiles busy for a while with films that have been too hard to find outside of Korea for too long.

To help you find Korean TV on YouTube, viewers in Korea now have a new Shows page organizing all programs available. For the rest of the world, you can still find the shows through youtube.com/shows/other-languages, but note that not all programs are available in all countries.

On the Shows page in Korea, you’ll find new programs like Infinite Challenge (무한도전) and classics like My Lovely Sam-Soon (내 이름은 김삼순), with subtitles in English, Spanish and other languages. The new Shows pages also gives you key information about the program, such as a cast list and credits. 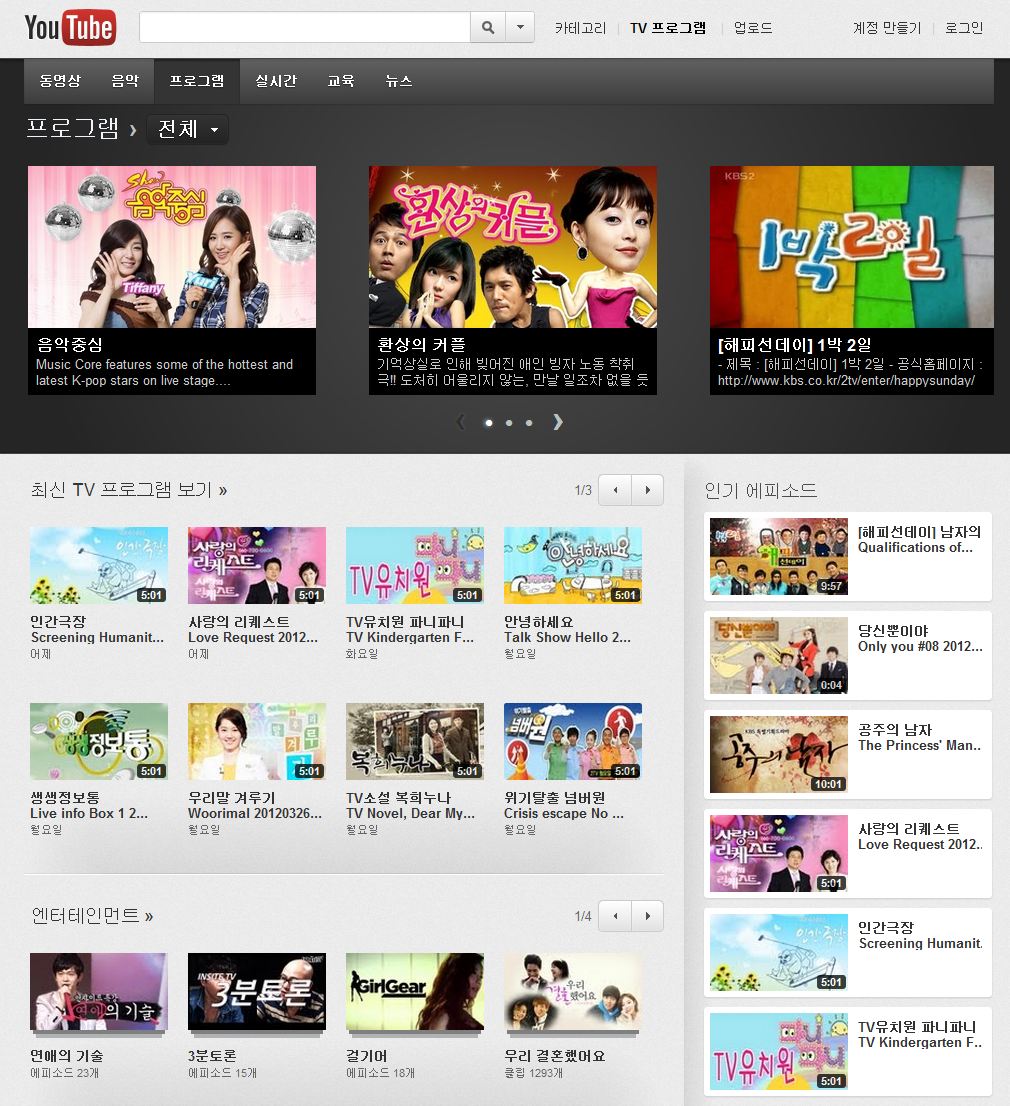 In many cases, each episode is divided into clips, but there’s no need to click on each video one at a time. The first video selected will automatically link to the next video and that one to the next. So once you start watching, you can easily flow to the end of the show.

If you have a favorite TV program, subscribe to the channel so that you’ll be updated on your homepage whenever there’s a new episode. We’ll be adding more programs from more stations in the future, so check back frequently.

Pororo the Penguin and the other Korean pop sensations

Author Admin
In Korea, we’ve seen our pop culture get big in Asia over the last decade, and through YouTube we’re seeing this expand even further around the globe.

Tickets for the recent SM Town concert in Paris featuring hit Korean groups Girls Generation, TVXQ, and SHINee sold out in 15 minutes. Female pop group 2NE1’s new video “I AM THE BEST” got 5+ million views in one week, and their audience is spread out widely over six continents. The six-episode spin-off of Korean TV sitcom “Playful Kiss” has now seen 21+ million views, with channel comments in a half-dozen languages. And when we worked with TV show MBC Star Audition last fall to find the next K-Pop star, Canadian Shayne Orok, who had never been to Korea before the contest, ended up as one of the remaining three finalists.

On top of that, the Korean animation studio Iconix Entertainment opened the PororoTV channel on YouTube this week for its iconic children’s show "Pororo the Penguin." This computer-generated show about Pororo and his friends is already televised in 110 countries, but now you can watch it whenever you want on YouTube. Iconix has put up the first two seasons of the show, and the full 52 episodes of Season 1 are available in English.

Pororo is so famous in Korea that he is called “President Pororo.” Hopefully he can also take the role as “Ambassador Pororo” in spreading Korean animation around the world.