Author Admin
We think it’s important to shine a light on how government actions could affect our users. When we first launched the Transparency Report in early 2010, there wasn’t much data out there about how governments sometimes hamper the free flow of information on the web. So we took our first step toward greater transparency by disclosing the number of government requests we received. At the time, we weren’t sure how things would look beyond that first snapshot, so we pledged to release numbers twice a year. Today we’re updating the Transparency Report with data about government requests from January to June 2012.

This is the sixth time we’ve released this data, and one trend has become clear: Government surveillance is on the rise. As you can see from the graph below, government demands for user data have increased steadily since we first launched the Transparency Report. In the first half of 2012, there were 20,938 inquiries from government entities around the world. Those requests were for information about 34,614 accounts. 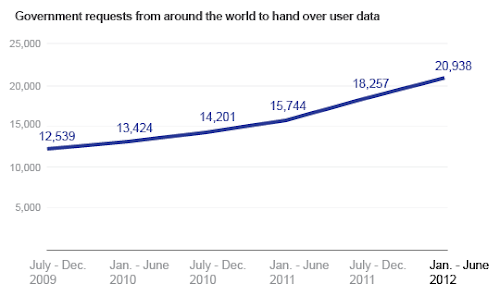 The number of government requests to remove content from our services was largely flat from 2009 to 2011. But it’s spiked in this reporting period. In the first half of 2012, there were 1,791 requests from government officials around the world to remove 17,746 pieces of content. 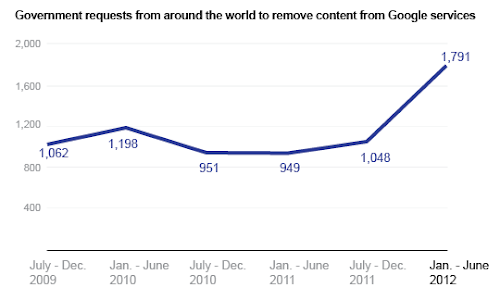 You can see the country-by-country trends for requests to hand over user data and to remove content from our services in the Transparency Report itself, but in aggregate around the world, the numbers continue to go up.

As always, we continue to improve the Transparency Report with each data release. Like before, we’re including annotations for this time period with interesting facts. We’re also showing new bar graphs with data in addition to tables to better display content removal trends over time. We’ve now translated the entire Transparency Report into 40 languages, and we’ve expanded our FAQ—including one that explains how we sometimes receive falsified court orders asking us to remove content. We do our best to verify the legitimacy of the documents we receive, and if we determine that any are fake, we don’t comply.

The information we disclose is only an isolated sliver showing how governments interact with the Internet, since for the most part we don’t know what requests are made of other technology or telecommunications companies. But we’re heartened that in the past year, more companies like Dropbox, LinkedIn, Sonic.net and Twitter have begun to share their statistics too. Our hope is that over time, more data will bolster public debate about how we can best keep the Internet free and open.

Author Admin
About two years ago, we launched our interactive Transparency Report. We started by disclosing data about government requests. Since then, we’ve been steadily adding new features, like graphs showing traffic patterns and disruptions to Google services from different countries. And just a couple weeks ago, we launched a new section showing the requests we get from copyright holders to remove search results.

The traffic and copyright sections of the Transparency Report are refreshed in near-real-time, but government request data is updated in six-month increments because it’s a people-driven, manual process. Today we’re releasing data showing government requests to remove blog posts or videos or hand over user information made from July to December 2011.

Unfortunately, what we’ve seen over the past couple years has been troubling, and today is no different. When we started releasing this data in 2010, we also added annotations with some of the more interesting stories behind the numbers. We noticed that government agencies from different countries would sometimes ask us to remove political content that our users had posted on our services. We hoped this was an aberration. But now we know it’s not.

This is the fifth data set that we’ve released. And just like every other time before, we’ve been asked to take down political speech. It’s alarming not only because free expression is at risk, but because some of these requests come from countries you might not suspect—Western democracies not typically associated with censorship.

For example, in the second half of last year, Spanish regulators asked us to remove 270 search results that linked to blogs and articles in newspapers referencing individuals and public figures, including mayors and public prosecutors. In Poland, we received a request from a public institution to remove links to a site that criticized it. We didn’t comply with either of these requests.

In addition to releasing new data today, we’re also adding a feature update which makes it easier to see in aggregate across countries how many removals we performed in response to court orders, as opposed to other types of requests from government agencies. For the six months of data we’re releasing today, we complied with an average of 65 percent of court orders, as opposed to 47 percent of more informal requests.

We’ve rounded up some additional interesting facts in the annotations section of the Transparency Report. We realize that the numbers we share can only provide a small window into what’s happening on the web at large. But we do hope that by being transparent about these government requests, we can continue to contribute to the public debate about how government behaviors are shaping our web.