Author Admin
This year’s game day was was full of action--both on and off the field. After Baltimore and San Francisco battled it out during the game, you went online to vote for your favorite game day commercial in our annual YouTube Ad Blitz contest. After a week of intense competition, we’ve tallied the final votes and you chose Ram Truck brand’s "Farmer" commercial as your favorite ad of the big game!

Rounding out the top five commercials of the big game are spots from Budweiser, Samsung, Jeep and Hyundai:

From celebrity cameos to poetic images, these commercials represent the game day ads that resonated most with viewers online. In addition to being the highest voted ads on Ad Blitz, the five spots combined generated more than 61 million views on YouTube in two weeks--making up more than 30 percent of all total views of game day ads and teasers on YouTube (as of February 14). And the Ad Blitz channel had more than 46 million interactions with this year’s new features such as "Call the Coach" and "Paper Football."

In a new addition to our yearly celebration of advertising excellence, we welcome you to join us Saturday, February 16, at 3 p.m. ET / noon PT as we host a Google+ Hangout with the creative heavyweights behind these winning ads, along with ADWEEK editors James Cooper and Tim Nudd.

Tune into the YouTube homepage today to check out the top five spots!

Author Admin
From brewskies to Bradshaw and celebs to salsa, the 2012 Super Bowl brought millions of you from across the globe to YouTube's Ad Blitz channel to vote on your favorite commercials. When the final tallies came in, Ad Blitz saw more than 89 million views worldwide, and the day after the game, 26 percent of those came from outside the US.

The Ad Blitz team was so excited by all of you that participated, so to thank you we pulled together an infographic about the activity from the big game. 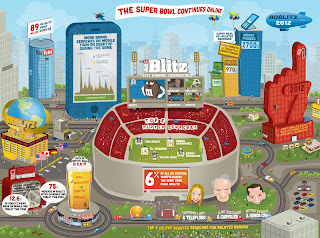 If you’re as inspired as we are by some of these commercials, check out more creative campaigns on YouTube to spark some ideas of your own.

Author Admin
While America’s feelings were divided on the outcome of the game, there’s one aspect of Super Bowl Sunday that crosses team loyalties and brings us together — the commercials. This year’s commercials had something for everyone, from cute dogs to talking babies to Adriana Lima. After a week of intense competition in the YouTube Ad Blitz contest, the votes are in and you voted M&M’S “Just My Shell” commercial as your favorite ad of the Super Bowl!

Rounding out the top five commercials of the big game are spots from Chrysler Group, Bud Light, Chevy Silverado and Doritos:

Give me the stats!
In its fifth year running, YouTube Ad Blitz has already surpassed previous years with 133M views from fans worldwide, up 43 percent from last year (as of Sunday, 2/12)...and still counting! In fact, during game time roughly 6 percent of all U.S. YouTube traffic came from people watching Super Bowl commercials on Ad Blitz.

The days that saw the highest volume of views were Sunday, Monday and Tuesday, making up 82 percent of total views received over the week. And it wasn’t just fans in the states seeking out the commercials — nearly 18 percent of all views came from outside of the U.S. Other interesting stats include:
Tune into the YouTube homepage today to check out the top five spots!

Author Admin
Super Bowl XLVI will be one of the biggest moments of the year for advertisers, commanding the attention of millions of Americans tuned in to watch the game. After the big plays on the field, you can join in on the action online with YouTube Ad Blitz — where you decide the best commercial of the game. 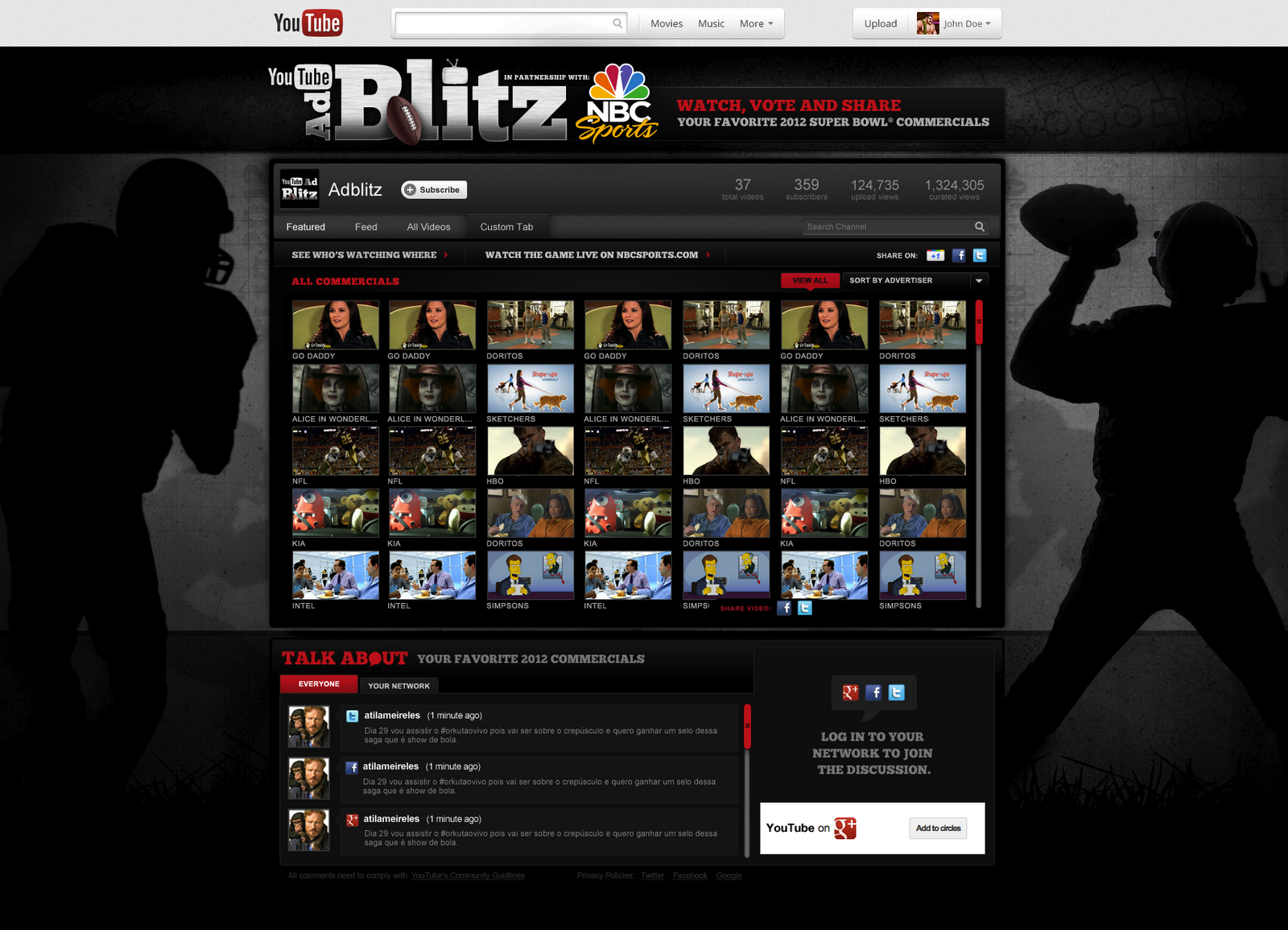 Troy Ewanchyna, Vice President, Business Development & Digital Strategies, NBC Sports Group, noted, “YouTube’s Ad Blitz is the perfect platform for us to extend our online promotion for our coverage of Super Bowl XLVI. The post-game Ad Blitz and the next-day Google+ Hangout allow us to extend our coverage and continue to serve viewers even when the game has concluded.”

The Ad Blitz gallery will be hosted on NBCSports.com and the YouTube Ad Blitz Channel, where you can watch your favorite commercials after they’ve aired on NBC. Voting begins after the final whistle and will continue until Midnight ET on February 13. We’ll also host a Google+ Hangout after the game where you can chat face-to-face with an NBC celebrity. Stay tuned to our blog for details.